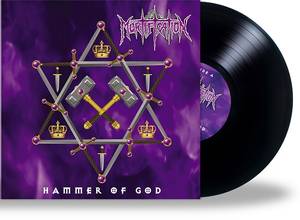 Continuing with our chronological release of Mortification albums on VINYL, Soundmass are happy to announce the LP release of their 8th studio album Hammer Of God.

Mortification are the undisputed pioneers of Christian death/thrash metal and Australia’s most successful metal band. With releases on label giants like Nuclear Blast and Metal Blade, albums like “Scrolls Of The Megilloth” and “Post Momentary Affliction” which are considered classics, world tours and a sound that is constantly being reinvented – having delved into death metal, grind, thrash, power metal, groove metal, classic metal and even a touch of punk – Mortification is a band that cannot be put in box.

Hammer Of God (1999) continued the collaboration between Nuclear Blast (Europe), Metal Blade (USA) and bassist Steve Rowe’s own label, Rowe Productions (Australia), which saw the album released far and wide. It also continued with their innovative hybrid of classic metal and thrash, with just a hint of death metal, as exhibited on the preceding Triumph Of Mercy and EnVision EvAngelene. The vocals are gritty, the guitar tones are superb, the riffs are powerful, the drumming is concise. The talent of Mortification in being able to craft catchy yet aggressive metal tunes is showcased in the album openers “Metal Crusade” and “Martyrs”, with the rest of the album following suit.

Remastered for vinyl and with the cover artwork reimagined by Scott Waters (Ultimatum/NoLifeTilMetal) , this is the first time Hammer Of God has ever been available on vinyl. Also included is an insert with lyrics and photos. This edition is a must for fans of this pioneering Aussie band and any true metal enthusiast.

TRACK LISTING:
Side A
Metal Crusade
Martyrs
Lock Up The Night
A Pearl


Side B
In The Woods
Hammer Of God
Liberal Mediocrity
Extreme Conditions
Ride The Light
D.W.A.M.

Here is an update from Soundmass, the label releasing this: As the 300 black vinyl from 2017 had …