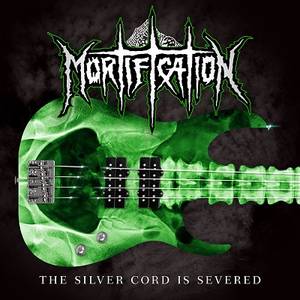 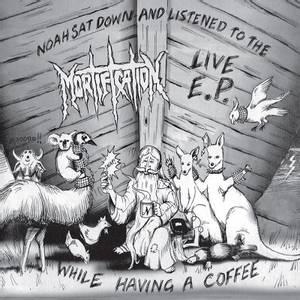 The Silver Cord Is Severed (2001), their 9th studio recording, continued the collaboration between Nuclear Blast (Europe) and bassist Steve Rowe’s own label, Rowe Productions (Australia). It also continued with their innovative hybrid of classic metal and thrash, with just a hint of death metal, as exhibited on the preceding albums – the riffs are solid, the melodies are catchy, there are tempo changes aplenty and the production is clean. As always, Steve is exceptional on bass and Lincoln’s guitar playing shines like never before, but what took this album to the next level was new drummer Adam Zaffarese. The son of Rosanna’s Raiders drummer Johno Zaffarese and still in his teens, Adam’s skills far exceeded his years. For added value, we’ve also included 5 bonus tracks – previously unreleased live tracks recorded during Mortification’s 2001 European tour.

Noah Sat Down… a live and raw recording of these Aussie boys performing in their home country in front of appreciative fans, with the addition of a 10+ minute interview. The full title – Noah Sat Down And Listened To The Mortification Live E.P. While Having A Coffee – and the cover artwork (by former drummer Jayson Sherlock) exemplify Steve Rowe’s oddball sense of humour. An original version of this CD has long been VERY hard to obtain.

Remastered and with reimagined cover artwork, along with a dual-cover, all-new layout, this 2-CD edition is a must for fans of this pioneering Aussie band and any true metal enthusiast.

Disc 2: Noah Sat Down…
Envision A Beginning
Buried Into Obscurity
Steve Talks
Noah Was A Knower
Interview With Steve