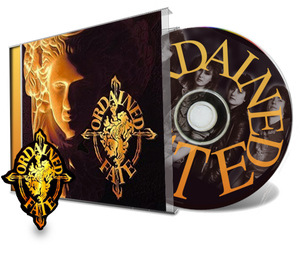 Ordained Fate is an early 90’s female-fronted Christian thrash band. Pam Scott and Annette Cvengros met in high school. After meeting Marge, they put their band, Cryptic Axe, together. After numerous attempts at the band and going back and forth with their Christian walk, in 1990 Ordained Fate was officially born. Ordained Fate released a 7-song demo which gained them attention in the Christian Thrash Metal market. They would end up opening for bands such as Believer, Sacred Warrior and The Crucified and release this self-titled album in 1992 on Wonderland Records. Ordained Fate’s debut album has been completely remastered & reloaded and now includes their original 7-song demo EP from 1990.

4 of the 7 songs from that demo, MIDNIGHT EXODUS, LIGHT BEARER, THE HUNTED and TEMPTATION II, were not on any other album and only available on cassette until now.