KRIG: Back To Square One (DVD) 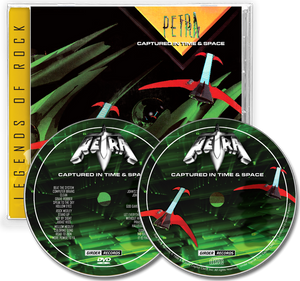 This Girder Records Legends of Rock™ has been completely remastered. This release come in a jewel case with multi-page booklet insert that includes readable lyrics, photos, liner notes. It also comes with the DVD, making this the an exquisite Collectors Edition with both the remastered CD as well as the DVD.

Finding a complete version of Petra’s live album, Captured in Time and Space, which features Greg X Volz, can be a tricky task. The version released on vinyl was a double record set. When the version available on cassette was released, it contained a bonus track called “The Great I Am.” This song was inserted between the last two songs, “Godpleaser” and “It Is Finished.” When the CD version was originally released, it did not contain the bonus track from the cassette, and the talking in between the songs was altered from the vinyl version and used some of the talking from the cassette version. Interestingly, the UK vinyl version eliminated all talking between the songs “Godpleaser” and “It Is Finished.” When the band released the concert recording on DVD it was sourced from the original VHS cassette tape since the masters were lost, and the song “Computer Brains,” did not appear. Also, the concept video for “Beat the System,” that appeared on the original VHS was cut. However, the DVD version did include “The Great I Am,” the track from the cassette version. Speak to the Sky (Track 9) was also not on the VHS or DVD but was on the original cassette and vinyl and is on this remastered CD.

Get ready for a very special Girder Records release: Collectors Edition CD/DVD set. You will be able to hear “The Great I Am,” on the DVD.  This CD/DVD set will contain all version some on the CD, some on the DVD and give you an opportunity to fully enjoy this incredible concert with the vocals of the incomparable Greg X Volz!

Petra left an indelible mark on teenagers all over the world throughout the 80's. Bob Hartman (founder) and Greg X. Volz and band dropped 6 elite albums from 1979-1986.  However Petra's Captured In Time and Space, which was released in 1986, would be the last for Greg X Volz and the end of an era as John Schlitt would join Petra as new lead vocalist latter that same year.

Usually live albums are not favorites among fans, unless of course you were privileged enough to be in the crowd (then you tell everyone you know, "I was at that show").  However this album for so many of us left an impression not much different from the studio recordings.  Everything about it was great. The sound quality is great and it contains all their top hits, a 3-song Rock Medley as well as a Mellow Medley and a guitar, Drum and Keyboard solo, literally everything you want from a great live performance and none of the stuff you don't want.

One of the odd things about this project is that it was a combination of 3 live performances (shown below). The cassette version and DVD contained an additional song called THE GREAT I AM, which came towards the end of Invitation (Track 30) that wasn't on the original 2xLP Vinyl or CD.  It wasn't a particularly great or memorable song (IMO) as it had more of a gospel music feel to it.  We know that might be important to some people, so you can now hear that song on the DVD, but we were not able to alter the audio for the CD due to contract limitation with our license with Capital Christian Music.