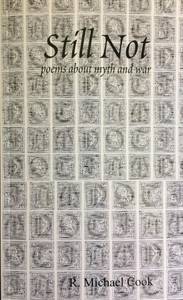 STILL NOT - Poems about myth and war by R. Michael Cook (A Hill To Die Upon)

This book is a collection of my poems over the last 10 years. I began writing them in college, inspired by the 19th Century romantic poets of England and catalyzed by Langston Hughes. The utility of mythology, horror of totalitarian governments, and the warnings of war, have been the subject of most of my lines. The seriousness of the subjects seem to necessitate the time spent transmuting them into poetry in the first place.