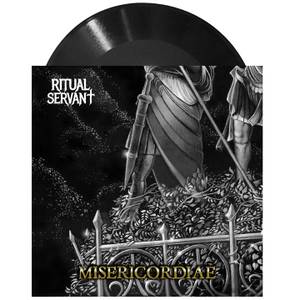 SERIES #2 OF 4 TOTAL - COLLECT ALL TO MAKE COMPLETE ART

In case you’ve been living under a rock this year, you have undoubtedly heard some of the killer new Christian thrash metal being put out by the one and only Ritual Servant, one of the premiere thrash bands in the genre right now, but let’s do a quick review!

The band has already finished recording the second and third 7” singles ‘Misericordiae’ and ‘Opinione’ and released these two digital singles as a result.

The band was also featured with their song ‘Hearers and Doers’ on the Roxx Records CD only compilation ‘Preachers of the Underground Volume I and their single ‘Lazarus’ was recently featured on the limited edition CD only compilation ‘All Hallows Eve - We Love Hating Evil’. Let’s just say these guys have been very busy!-ROXX RECORDS