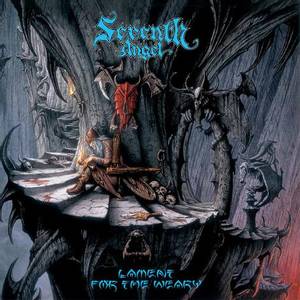 Only one year after their groundbreaking debut release, Seventh Angel unleashed this 1991 thrash metal masterpiece upon a very unsuspecting world. As the album title indicates, Lament For the Weary is a concept album which lyrically focuses on how we deal with lifelong depression and pain. “No Longer a Child” offers God’s words of consolation: “My little child, I see your pain / I cry with you / every tear you weep - weep with you.” Haunting musically and lyrically, don’t be surprised when Lament For the Weary sends chills down your spine! Rarely does a thrash metal band hit the bullseye so squarely. And rarely is a band able to augment full-on shredding with mellow, subtle moments the way Seventh Angel triumphs on Lament.

UK magazine Cross Rhythms wrote in 1992 that Lament for the Weary was "superior thrash". The Whipping Post's Matt Morrow states that Lament for the Weary belongs to one of the very best albums of heavy metal music in general and that the album is "a classic in every sense of the word." On the Christian Metal Realm’s Top 100 Christian Metal Albums Seventh Angel--Lament For The Weary was voted #68 by fans! Fan online reviews regularly hail Lament as “one of the best thrash metal albums of all time!” They are not wrong! Again, featuring the epic artwork of Rodney Matthews the band reached for aural and visual perfection with their second album and definitively made it. The 2018 Retroactive Records reissues have been digitally remastered by Rob Colwell at Bombworks Sound and with full band approval. CDs are packaged in a jewel case with a 12 page insert featuring amazing band pics, a write up to fans from Ian Arkley, and lyrics. The Double Vinyl reissue is Blue Vinyl with a full color jacket and insert. After being reissued several times, we can say definitively the album has never looked or sounded better! For fans of Sabbat, Trouble, Vengeance Rising, Believer, Detritus, Deliverance, Metallica, and Exodus.

1 Recollections Of A Life Once Lived

2 Life In All Its Emptiness

3 No Longer A Child

5 Lament For The Weary

7 Falling Away From Reality