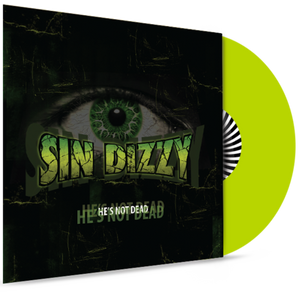 Remastered and Reloaded... Yes, SinDizzy “He’s Not Dead,” is on a limited edition Lime Green Vinyl featuring Oz Fox and Tim Gaines of Stryper.  It's been completely remastered for vinyl.  Limited to just 500.

The album was originally released in 1998 on CD. 10 years later in 2008 Girder Records licensed it with new artwork.  Fast forward to 2019 we have remastered it for vinyl and are proud to offer this amazing limited edition green vinyl. Which will also make this the first time ever on vinyl.

Sin Dizzy was a '90’s rock band that emerged from a friendship between drummer John Bocanegra and guitarist Oz Fox of the Christian heavy metal band Stryper on the heels of Stryper's break-up in 1995.  Something that many might not know is, the last four songs on this album were actually written and presented for the next Stryper album following Against The Law.  However Michael Sweet soon left Stryper for a solo career and the band only played a few live shows before calling it quits.  The first 6 songs were the Sin Dizzy promo.

Many have stated that Oz and Michael have some similar vocal qualities. You're about to hear the other half of those Stryper harmonies that you've grown to love.