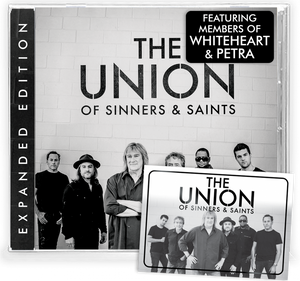 From the two bestselling Christian Rock bands of all time, with over 15 million albums sold, 25 #1 songs, 15 Grammy™ and 40 Dove awards and nominations between them.

Although it includes John Schlitt of PETRA and Billy Smiley of WHITEHEART, it also includes Brian Wooten from Whiteheart & Trace Adkins (guitar), Michael W. Smith on the B3 organ, Dann Huff of GIANT (guitar), Bob Hartman and John Lawry from Petra. Phil Keaggy even lays down a killer solo. Chris McHugh from Whiteheart and Keith Urban and Jon Knox from Whiteheart and Adam Again.  Peter Furler of Newsboys lays down some drums and vocals, Dave Ellefson of Megadeth on bass and others.

How's that for an all-star cast?

Few artists were more influential in defining contemporary Christian rock music in the 20th century than Petra and Whiteheart, arguably the best-selling Christian rock bands of all time, with sales of over 12 million records between them, 25 #1 songs and earned more than 15 Grammy™ and 40 Dove nominations and awards.

John Schlitt, lead singer of Petra, and Billy Smiley, guitarist, singer, and founder of WhiteHeart, teamed up with two other Whiteheart members to form The Union of Sinners and Saints in 2016 to offer a self-titled collection of new songs and familiar remakes. That 2016 digipak CD showcased soaring rock vocals from Petra’s John Schlitt with Whiteheart’s Billy Smiley producing, singing, and playing, recalling distinctive echoes of the Whiteheart sound with an all new in-your-face delivery. The project featured ten new songs, as well as updated versions of Petra’s “Beyond Belief” and Whiteheart’s “Independence Day.” A year later in 2017 they released a vinyl but instead of all the songs it included an Acoustic Medley.  It also contained a different cover. This special Expanded Edition includes that original vinyl cover but it also includes 4 bonus tracks, One More Shot, Reckless Love, I Still Believe (yes, The Call song which became a defining song for Russ Taff) and that Acoustic Medley originally only found on the vinyl, now in a jewel case.

“Whether it’s a blazing cover of the classic hymn “Christ the Lord is Risen Today” (in the tradition of the Petra Praise series) or a stable of entirely new originals, the guys aren’t shy about their faith or witnessing to the world at large. And even with more than a dozen million album sales behind them, Schlitt, Smiley and the band sound as musically hungry as ever with a straight ahead melodic rock collection that ranks right up there with either co-leader’s best work.” FROM CCMMAGAZINE.COM