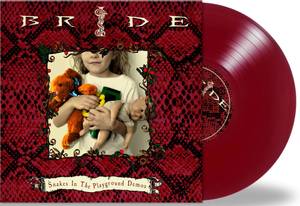 ABOUT THE ALBUM
These are songs that were originally recorded for the Snakes in the Playground album (1992).  The tracks may or may not have been used, or songs might have different lyrics, choruses, etc.  These are not the finished products that ended up on the classic album, but these demo tracks have all the magic and wonder of the finished product. Now you get these remastered treasures all on one album on vinyl for the very first time (remastered) and it comes with a full color 12x12 insert with liner notes from Troy Thompson (guitarist)!

TRACKS
1. Would You Die
2. Rattlesnake
3. Somethings Never Change
These demo tracks all made it onto Snakes In The Playground.

4. Same Ol’ Sinner
A demo version of the song that ended up on the
End of the Age compilation.

5. I Miss The Rain
This song made it onto Snakes In The Playground.
The version presented here is quite a bit different from the one on Snakes. We eliminated the keyboards & completely reworked
the chorus to put it in a major key.

6. Beast
This track was later used on Scarecrow Messiah.

7. Scarecrow
This song ended up being the title track for Scarecrow Messiah.

8. Pyramid
9. Place
These were later re-recorded for the
Scarecrow Messiah album.

10. We Don’t Need No Colour Code
Recorded for a Steve Taylor tribute album.

11. Sleepy Southern Town
This was just a fun song to write and play but it never
made it onto Snakes in the Playground or Scarecrow Messiah.

12. I Miss The Rain
Alternate Version