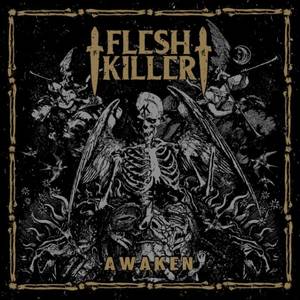 Founded by Ole Børud, Fleshkiller saw the light of day as a result of Extol’s return to hiatus after their last album in 2013. Børud continues his journey exploring the progressive sides of death metal with his brand-new band Fleshkiller. Reuniting with his former band mate Peter Dalbakk from their early 90´s melodic death metal act Schaliach. The upcoming debut album entitled ‘Awaken’ was recorded and mixed between late 2015 and early 2017 at multiple locations around the world. Also written by Ole Børud, the style of music mixes old school death metal aesthetics with rich harmonic prog fusion elements. Compared to his previous efforts in the genre these new compositions spark a new level of intensity!

“With their jaw dropping mix of pure metal brutality and mesmerizing hooks, Fleshkiller make an astonishing entrance to the stage of metal. Their debut record stand short of none, and is a testament to the fantastic musicianship and songwriting capabilities embodied by the band.” - Erlend Gjerde, Managing Director at Indie Recordings.

2. Salt of the Earth

UMPFEL: As The Waters Cover

UMPFEL is a duo of Norwegian guys playing progressive rock/metal of HIGH class! We just received …