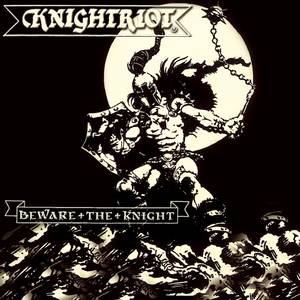 Originally from Phoenix, AZ, the band would take its first shape back in 1985 under the name NYTRO. They would soon move to Los Angeles, changing their name to KNIGHTRIOT. The LA Heavy Metal scene was huge at the time and the band started to generate a good name after several gigs in popular clubs around west Hollywood (The Troubadour, The Whiskey A GoGo, The Roxy etc).

KNIGHTRIOT released their debut “Speak no Evil” demo back in 1989. The solid, straight in the face Heavy Metal and the Christian oriented lyrics were the two main features that actually formed the band’s overall trademark. Someone can realize all that by hearing only the first notes of the hymn “Holy Avenger” included in this tape.

Their classic second demo tape came out one year later, in 1990. “Beware The Knight” is obviously a well worshiped release by the Christian Metal fanatics. Anthems like “The Sacred Legend”, “Beware The Knight” and of course “Serve Thy Master” are all included in here.
KNIGHTRIOT’s third and final “Killing Time” demo was released back in 1992 including remarkable songs like “The Second Coming”.

Since the band’s split back in 1993, people mainly focused on the Xian Metal underground kept on searching for those three tapes. As years were passing by, many more Metal fans and collectors worldwide started to discover the music of this great Heavy Metal band from LA. It was starting to become obvious that an official reissue of KNIGHTRIOT’s music was needed.

Arkeyn Steel Records team managed to track down the founding members, brothers Danny and Jeffrey James (bass and vocals) in order to set up a reissue of the complete KNIGHTRIOT recordings.

All the audio has been remastered from scratch from the original demo tapes by Kostas Scandalis at Infinity studio, Thessaloniki. Lyrics and a lot of unreleased photos are shaping a 12-page booklet also including an in depth band biography written by Danny James himself. The overall artwork has been designed by Kostas Athanasoglou including a new expanded version of the epic front cover of the second demo.

Melodic and riff based, ala ARMORED SAINT and SWORD, the Heavy Metal of KNIGHTRIOT takes no prisoners. For the Christian Metal fanatics it is a must addition next to similar sounding bands like CROSS, BLOODGOOD, FINAL AXE and SAINT.

On the Second Coming, the Holy Avenger will strike! Beware!

JUDEA: Out Of The Dark CD

GOLGATHA to release special CD of 'Prisoner' EP Limited to 300 copies! Sometimes when …

Roxx Records is at it yet again, this time we unearthed another Gem from days gone by, and …