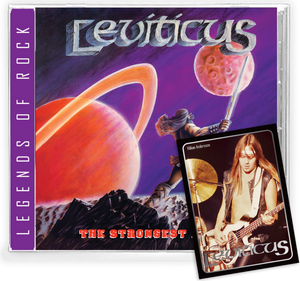 In 1985, Leviticus released a real powerhouse album called The Strongest Power (1985).  According to the metal magazine, Kerrang, the album was ”one of the best records of the year”... which incidentally came from one of the most respected music magazines.  It also had two different covers or alternate covers, which we have made available on the CD. Just flip it over.

In 1987, Håkan Andersson left the band and was replaced by Ez Gomér, and Terry Haw became the band’s lead singer. (Both, left and later former Jet Circus.)

FORMAT: CD JEWEL CASED EDITION WITH FULL COLOR BOOKLET (500) In Sweden this just may be the …