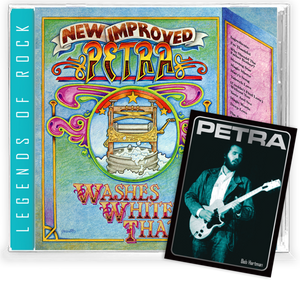 Originally released in 1979, Washes Whiter Than has never been on CD with all 10 songs, until now.  I know that is hard to believe but it was only released as a double album alongside of Never Say Die in 1988, leaving off 2 songs (#7 “Couldn't Find Love Without You” and #9 “Magic Words”). Finally, 42 years later we get to celebrate this complete album on CD for the first time ever.  Now, completely remastered from original sources and containing all 10 songs in the order it was originally released on cassette and vinyl.  Complete with LTD trading card, with an 8-page booklet containing lyrics, photos, and original credits in a jewel case. Incidentally, the original 1988 double album had all 10 songs listed on the disc face but not on the back of the CD (tray card) and were not actually on the CD.  The tray card also incorrectly had Never Say Die listed first and Washes Whiter Than second.

Washes Whiter Than was Petra's 3rd album and introduced us to Greg X. Volz. It also introduced us to Rob Frazier and if you've been following our Legends of Rock series, you'll know that we released remastered CDs of both of Rob's first two solo albums.  Both Rob and Greg handled lead vocals for the album and even sang on both “I'm Thankful,” as well as “Yahweh Love.”  The band was intentional about creating a soft radio friendly album as their two previous albums were too hard/heavy for Christian radio in the 70s which was mellow. Thankfully, songs like “Morning Star” and “Magic Words” still rock, and musically it is a masterpiece and holds its rightful place among other albums. The album art was pretty cool too, originally created to look like a soapbox thanks to George Werth. Although there was no song called Washes Whiter Than, we clearly knew after listening to it, that Jesus washes our sins away.