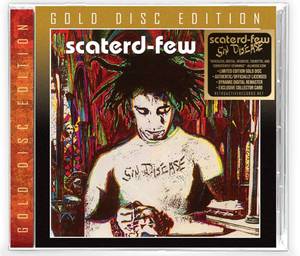 ***PRE-ORDER! Releasedate is late March. We expect this in stock early April 2023.

ABOUT THE ALBUM
Perhaps the single most controversial Christian rock album of all-time! A decade after it's release, HM Magazine called Sin Disease “the record that decisively ended the ’80s” (for Christian music) and also “Christian music’s best punk album ever.” Lyrically, Sin Disease deals with such topics as a friend’s death as a result of gang violence
(“Lights Out”) and cocaine addiction (“Glass God”). The opening track, “Kill the Sarx,” uses violent imagery in its graphic interpretation of a biblical theme (Galatians 5:24; sarx is the New Testament Greek word for “flesh”). The Christian scene had never been exposed to such stark/dark themes in 1990 (a year before Nevermind). The photo of Allan Aguirre for the album cover originally showed him shirtless, sporting “wild” dreadlocks. The locks remained, but the record company actually drew in a
shirt over the singer’s bare chest to minimize perceived offense. Yet, in the midst of all this controversy was one of the most brilliant, creative, transcendent and earth-shaking rock records of all-time. Rarely has one single album had such a profound impact on how we think and see the world.  Yet, Sin Disease did all that, and more.  Produced by Terry Taylor (Daniel Amos) and Allan R. Aguirre, the band ascended far beyond what its raw demos hinted was possible. Notably, the band supported the album with an appearance at Cornerstone Festival, and a tour with mainstream icon, HR of Bad Brains.
Never before reissued on CD, the album has been expertly remastered by J Powell at Steinhaus, features an 8-page booklet in a jewel case, and each CD comes with a Scaterd Few Ltd Collector Card!  Limited to just 1000 units, grab this treasure while you can!

Roxx Records is very excited to bring you some new rock n roll! Tired of the blaring, screams …